Today I am reporting from the crossroads of Weary and Fury.

Intersecting with Trauma and Devastation.

We have at least two high-profile murders of very young Black men to remind us what we’re up against from the time the sperm hits the egg to spark Black life: 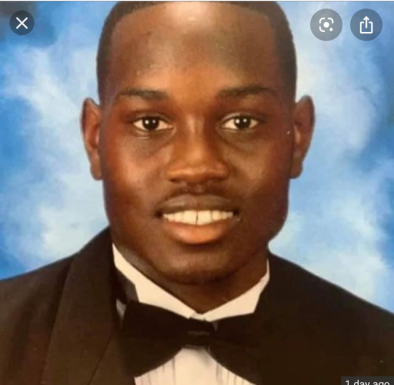 On February 23, 2020, 25-year-old Ahmaud Arbery was jogging near his home in Brunswick, GA, when two White men—Travis McMichael, 34, and his retired police officer father, Gregory McMichael, 64, chased Arbery for no reason other than he was Black. When Arbery tried to grab the shotgun from Travis, he was shot and killed. Travis then rolled the body, leaving him with blood on his hands. The police report recorded the McMichaels’ version to paint Arbery as the aggressor and make him responsible for his own death.

Today, nearly two and-a-half months later, the case is getting publicity. Predictably, some folks are calling for the McMichaels’ to be arrested, and one prosecutor wants the case to go to the Georgia Grand Jury. Of course grand juries are suspended in Georgia due to the ‘Rona virus.

As I am writing this—on the eve of Ahmaud Arbery’s May 8th birthday, news comes that the McMichaels’ have been arrested. According to The New York Times:

The Georgia Bureau of Investigation said that both men had been taken into custody and charged with aggravated assault in addition to murder. Travis McMichael fired the shots that killed Mr. Arbery, the state police agency said in a statement.

Even in the unlikely event that the McMichaels’ do any hard prison time or get the death penalty, any sense of relief we might feel will be fleeting at best. Because we know better. We’ve done this dance too many times to believe that any form of real, lasting justice will be served. No matter the outcome, nothing can ever be done to restore the life of a young man snuffed out simply because of his race. Nothing can temper his family’s endless grief, or fill the gap left by this travesty.

Yesterday, on May 6, 2020, some Indianapolis, IN police officers shot and killed Dreasjon (Sean) Reed, an unarmed 21-year-old Black man, who was running from them after a car chase. The officers didn’t know that Reed was recording it all on Facebook Live. Not only did the recording contradict the police report falsely claiming that Reed was armed, but it caught a detective laughing and joking about Reed’s funeral.

So here sits Black America at the oh-so-familiar intersection of Sick and Tired of Being Sick and Tired, processing these two horrific but, sadly, unremarkable takedowns of Black human lives as we struggle to navigate a global pandemic that also seems to have us in its crosshairs. As Al-Jazeerah reported on April 28:

If there’s one thing we know, it’s that Black lives are as fragile as they are precious, and as endangered as they are promising.

The collective Black response to this dynamic is spelled out clearly in this viral social media post (author unknown). Please say each of the hashtagged names aloud as you read.

Black people are so tired.

We can’t relax in the comfort of our own homes (#BothemSean and #AtatianaJefferson).

We can’t ask for help after being in a car crash (#JonathanFerrell and #Renisha McBride).

We can’t have a cellphone (#StephonClark).

We can’t leave a party to get to safety (#JordanEdwards).

We can’t walk from the corner store (#MikeBrown).

We can’t go to church (#Charleston9).

We can’t hold a hair brush while leaving our own bachelor party (#SeanBell).

We can’t get a normal traffic ticket (#SandraBland).

We can’t break down on a public road with car problems (#CoreyJones).

We can’t shop at Walmart (#JohnCrawford) .

We can’t have a disabled vehicle (#TerrenceCrutcher).

We can’t read a book in our own car (#KeithScott).

We can’t be a 10yr old walking with our grandfather (#CliffordGlover).

We can’t decorate for a party (#ClaudeReese).

We can’t ask a cop a question (#RandyEvans).

We can’t cash our check in peace (#YvonneSmallwood).

We can’t take out our wallet (#AmadouDiallo).

Tired of trying to convince you that our #BlackLivesMatter too.

Our quandary is eloquently expressed by Dr. Farah Jasmine Griffin, Director of the Institute for Research in African-American Studies at Columbia University, who wrote on Facebook: “This recent spate of violence, including murder, of black people, along with the heavily armed, white supremacist storming state capitals (carrying nooses, swastikas, and confederate flags and called good and decent people by you know who), and the obscene death toll of this cruel disease, is infuriating to say the least. One fluctuates between rage and despondency.”

Ah yes, rage and despondency. We know that combination all too well, don’t we?

Because we’re human, we’ll give into our weariness for a while. We’ll search for the tiniest frisson of hope, even knowing that this story will repeat on an endless loop of racist terrorism aimed at snuffing us out mentally, emotionally, and psychologically, if not physically.

We know that for every precious human life turned heartfelt hashtag in the endless quest to remind ourselves, and maybe to convince the killers that Black Lives Matter, there will be another one too soon. And many more after that.

There is nothing extraordinary about these racist murders, either by the police, or by private citizens. Nothing unusual at all.

Therein lies the problem, and the terrifying truth.

We understand that, after all of the grieving, mourning, raging; beyond the viral rants and eloquent think pieces; the marches, petitions, the prayers, the hymns, and the supplications…that there will be many more to come. If we have learned nothing else in nearly 500 years of ceaseless racist oppression, we know that.

And we know the reason why, though it’s not easy to admit. Not comfortable to face. Because racism stripped bare leaves us quivering in the face of its most naked truths:

That the Whiteness that defines and drives the USA requires a constant infusion of Black blood, Black tears, endless Black suffering, to feed its bottomless pit of hunger.

This Whiteness demands sacrifices of Black minds, bodies, and souls on the altar of its self-proclaimed magnificence, the notion of its inherent supremacy that underscores every aspect of life in this nation and throughout most of the planet.

This Whiteness is a vampire unable to be fully sated; craving and demanding enough Black trauma to keep it “alive” another day.

And it’s a helluva trickster: These notions of White “Supremacy” have been so efficiently internalized by some Black people that they can even manifest as “Black-on-Black” murders where we destroy ourselves and others like us.

As unsettling as it is to acknowledge this, we can’t ignore the fact that ultimately, the nonstop horror show that is racism is just business as usual in the USA.

Has been business as usual in some form since at least 1619 when the first enslaved Africans hit these shores.

America is the beast that demands our suffering and destruction; requires it to survive.

So at the crossroads of seemingly impossible choices and insurmountable odds, what’s our next move?

We will do what we always do:

Have a seat, take a breath—or several.

Meditate, mourn, and grieve the madness. Mull it over, breathe it in until it ignites that spark deep within that speaks to us of balancing these ugly truths with the power of the Ancestors whose journeys made our lives not only possible, but rich with possibility.

Even as the names that we call to the skies and immortalize in tear-soaked hashtags etch themselves like tribal markings onto our weary souls.

Even in the face of the eternally stalking, snarling beast.

While we might be set back or knocked down for a while, ultimately, we will reach back to those egun whose survival ensured our existence to replenish our parched souls until we stumble to our feet again.

We’ll rally the DNA that fortified our foremothers and forefathers through the Middle Passage, centuries of enslavement, Reconstruction, Jim Crow, the present-day reincarnation of all those as the prison pipeline, police brutality, and random Whitepeople wildin’ out.

We’ll remember, as the saying goes, who we are and whose we are. And though we know that there’s no end in sight for our nation’s blood lust, we will nonetheless gather our trauma-weary selves, our simmering fury, and we’ll rise to face the beast another day.

Because no matter what horrors and dangers stalk us, no matter how fury and weary intersect within us, no matter how mightily our own nation insists upon trying to destroy us, we’re not going to silence our screams of grief and outrage. We refuse to passively accept these attacks or accept them as something we deserve.  Put the beast on notice: just as those upon whose shoulders we stand did in times gone by, we are never going down without a fight.

Speaking of fight, here are some actions you can take in the name of Amaud Arbery:

On May 8, 2020–Amaud’s birthday–join runners around the world in honoring him and protesting his senseless murder

TaRessa Stovall is an author / blogger / identity activist. Her hot new memoir, SWIRL GIRL: Coming of Race in the USA is garnering praise for its bold, insightful take on how a Mixed-race girl grows to be a Black woman while honoring all of her Ancestry — living “AND” in a world of “EITHER / OR.” Check reader reviews here. Enjoy a FREE sneak peek of SWIRL GIRL here.