The planet Mercury is retrograde, mucking up communications like nobody’s business. Maybe popular blogger/influencer/author Luvvie Ajayi is more deeply impacted by these communication misfires than the rest of us. But I’m not quite ready to give her a planetary pass for the fauxpology she recently issued after publicly trashing unnamed Black and Mixed-race activists in a Facebook post, then spending most of the week defending her rant. 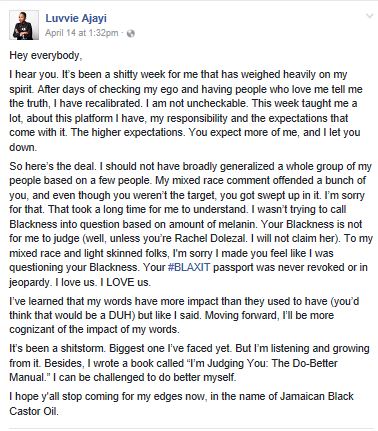 I’m going to analyze this from two of my areas of expertise: as both a Mixed-race identity activist, and and as a veteran strategic communications expert with special cred in crisis communications. My receipts in this area include Spelman College and other HBCUs, the Children’s Defense Fund Black Community Crusade for Children, speechwriting for high-level government officials, and teaching public speaking at Temple University, along with more than a decade of executive consulting in the public and private sectors.

Let’s break this down:

First–context. Now that Luvvie’s platform and spotlight are shining way beyond her blog and social media presence, her words and messaging are impacting other people and platforms beyond her own. It is possible that her being featured as one of the most “Woke” women in the new issue of Essence magazine, might have spurred someone in her circle to help her to realize this. And since monthly magazine content and covers are typically wrapped up weeks or several months ahead of publication, Essence was loving Luvvie long before her problematic FB post. 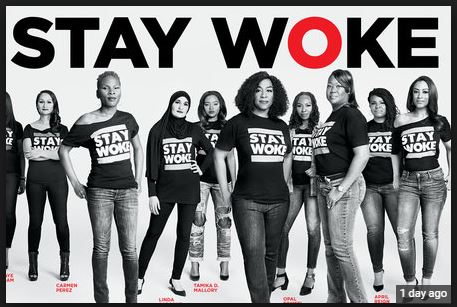 Luvvie is 3rd from left.

Reference: Here are her original offending rant and my response.

One thing is clear: If you build your brand on the concept of you judging people, you are seemingly not trying to understand or respect them or their point-of-view. It’s never a good idea to convey a mix of superiority and cluelessness when responding to a communications crisis, especially when you created that crisis in the first place. She’s many days late and several dollars short with the fauxpology, which should have run immediately after the “shitstorm,” and she blew the opportunity by trying to play colorist divide-and-conquer politics while opting out of taking actual responsibility.

Big picture takeaway: Beyond Luvvie, everyone experiences communications crises from time to time. How we respond can have more long-term impact than the original offense. And when done properly, the response can neutralize damage and sometimes even turn a negative into a positive. Let’s recycle this “shitstorm” into a teachable moment for us all.

A study published in the May 2016 issue of the journal Negotiation and Conflict Management Research outlines the essential elements of an effective apology:

2. Explanation of what went wrong

See how simple an apology can be?

And on a more personal note: Anyone who sincerely wants to know about Mixed-race people from the source is invited to visit Multi-racial Media, where a large and varied group of us very ably represent ourselves in all of our complicated glory. This is my very respectful request that all non-Mixed public commentators and anyone else who is inclined to trash, police, and/or play to us at the expense of any other People of Color, please cease and desist immediately and forever. We are more than capable of speaking for ourselves. And when it comes to potential conflicts, the old-school rules apply: Don’t start none, won’t be none. Because you don’t need to be any kind of communications expert to understand that common-sense wisdom.

Finally: As any communications expert can tell you, Mercury goes retrograde 3 to 4 times each year. Do your homework so you’re not misspeaking and you might not need to apologize in the first place.

2 thoughts on “Crisis Communications 101: Lessons to be Learned from Luvvie’s Fauxpology”