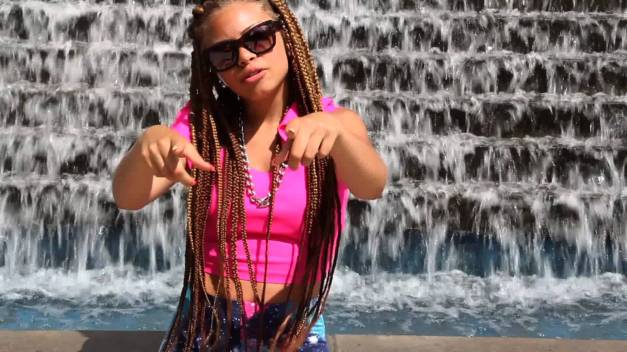 So I’m scrolling through Facebook minding my own Biracial Black and Blewish bizness when a Black woman posts subtle snark about a contestant on Jermaine Dupri’s new rap competition show who calls herself Miss Mulatto.

The commenters weighed in with presumptuous slings of #TragicMulatto, along with virtual side-eyes, teeth-sucking and freely expressed contempt at the young rapper’s choice of label. Which made me realize that it’s time to speak up and out against Black people identity policing us. Not because it’s offensive or hurts our feelings, but because when Black people perpetuate the #Tragic Mulatto stereotype and disdain our claims to self-identify, even with the locked-and-loaded, perpetually controversial M-word, they are inadvertently feeding White Supremacy.

I am reaching out with love and respect to request that you STOP identity policing us Black/White Biracial people. We are all well aware of the history of folks like us in this country, and throughout the Diaspora of Africans who were enslaved by White people. We know that most Black women were routinely raped by White oppressors, and that many Biracial/Mixed/Mulatto children were born from that horrific trauma. We know this created the hierarchy of light-skinned privilege—as in, often we were assigned to work in the Big House rather than the field—that still exists today. We are fully aware of colorism and how it appears to operate in our favor when in reality it works against us—the Biracial us, the Black us, the global us. Those deeply-rooted, underlying tensions are part of what keeps us from unifying and truly joining forces, working together for the greater good.

So this is a plea to just stop!

What I’ve experienced for the six-plus decades that I’ve been speaking up from my POV is that people in general and Black people in particular (because, truthfully, unless and until the topic bumps up on them in a personal way, few White people pay us much attention or care about how we self-identify), are accustomed to and therefore comfortable with being in charge of our identities.

And the problem with this is?

On the one hand, Black people like to cite the slavery-based “rule” that anybody with a single drop of Black blood is Black to demand our allegiance. On the other hand, a great many Black/White Biracial people are insulted, chastised, challenged and often rejected by Black people in their youth as “not really Black,” or “not Black enough.” When these mixed messages (pun intended) cause us to experience some very real cultural dissonance and/or ambivalence, we are quickly labeled “confused” about our identities. Of course, we’re not the ones who are confused—but you can read all about that in my upcoming memoir.

We’ve never been in charge of the language that is used to identify us in the USA. I grew up with the term Mixed which I still prefer because it is inclusive of any and all Mixed folks, and unlike Biracial, it doesn’t sound like a failed science experiment. I use the term Biracial because it’s popular in the lexicon, but I hate it, mainly because nobody asked ME what I wanted to be called or gave me a list of potential labels from which to choose. Which brings us to the uzi of Mixed-race labels: Mulatto.

I discovered the term Mulatto in my youth, back when research took place in libraries. I loved the musicality of the word, and the feel of it rolling off my tongue. And the first thing I read was that it is said to be a derogatory Spanish term comparing us to little mules, or asses. M’kay. Nothing surprising about that, considering the overall context of enslavement throughout the Diaspora, and the racism that fueled it. I wasn’t insulted; my feelings weren’t hurt. After all, White people the world over believed themselves superior to me and other folks of color. I tucked the word away like a delicious secret, loving its complex, painful backstory as much as its pretty sound.

The history of Mulatto, the caste system it represents (still in full force whether or not we want to admit it), and the rapes that created it make it easy to understand why so many Black people reflexively disdain and push back against the word. It’s painful, it’s ugly and to many, it’s divisive, at least when WE use it to refer to ourselves or others like us.

Interestingly, Black people are okay with using the term when talking about or at us, most always in a denigrating manner. So when a Mixed-race person has the audacity to claim the term and flaunt the specifics of their conception, all kinds of triggers are activated.

And the first thing that far too many Black people like to spit at us is the accusation that we are Tragic. I’ve been fighting that stereotype for decades. As a young child, I sent a reprimanding letter and poetic clapback to my literary hero Langston Hughes upon discovering that he was promoting the Tragic Mulatto stereotype. So I have had decades of experience in this realm.  (You can read all about it in my upcoming memoir, SWIRL GIRL: Confessions of a Racial Outlaw).

It seems that the concept of the Tragic Mulatto was created by White novelists and filmmakers in the early 1900s, promoting the idea that we are inherently tragic because we  are only half and not fully White, and defined by the fact that dwe hate and are repulsed by Black people and culture.

The Tragic Mulatto caught on with both Black and White folks, and was further popularized in White author Fannie Hurst’s novel, Imitation of Life, and the two hit movies of the same title—even though the allegedly Mulatto character was told by her Black mama that she was NOT Mixed—her daddy was “just real light-skinned.” But details be damned–the much-beloved stereotype was in full effect.

The problem is that obviously these White folk created and were promoting a super-racist stereotype that has, until the last couple years, been the SOLE interpretation of Black/White people—especially women—in American history, literature, culture or art.

But the mold was set, with White and Black Americans alike swallowing the propaganda of our deep misery hook, line and sinker. This allowed both groups to make prejudicial assumptions about any person born of a Black/White union, while distancing us as inherently problematic, and looking down upon us as naturally inferior. And many Biracial people, not having any other representation or point of reference, end up embracing it for themselves. Racism and White Supremacy shoot and score!

You see, the real tragedy deep down in the hearts and minds of both White and Black  Americans, is that in the present context and discounting instances of rape, our parents CHOSE to come together, were mutually attracted to each other and decided to have sex, knowing they ran the risk of procreating.

Despite many Americans’ claims that they are all kumbaya with Black/White interracial couplings, there is still a lot of resentment and discomfort around the actual fact of it. This is proven when a child comes into the picture, and people immediately start projecting their prejudicial notions, fears and fantasies upon us. Then they want to claim that WE are confused, rejected and Tragic. Mind you, this is a conversation they have only with themselves and others like them. Rarely do they ask us to share our stories, our truths, our realities, or respect our right to self-identify, since it collides with their preconceived notions and rules about what we are supposed to do.

So the FB friend and her friends’ sophisticated, educated snark about a 17-year-old Biracial rapper forcing folks to deal with the realities of her conception and identity by calling herself Miss Mulatto (which seems to me a pretty tame moniker in the overall rap/hip hop genre) reveals a few things:

But My People, we are in the 21st century.

It is time for Black people to stop feeding racism and White Supremacy by perpetuating the Tragic Mulatto mythology. While we might not have spoken up in the past, we are here now and we will not be backing down or shutting up. Newsflash: you no longer have to police our identities. We’ve got this. Trust me. You might not like how we go about it, or the dynamics of each individual’s life and identity choices, but it’s time to cross that off your list of what you’re responsible for overseeing. Take us or leave us on an individual basis—based not on what you presume because of some racist stereotypes from days long past—but on the truths, however uncomfortable and seemingly convuluted, that we bring to the table.

If and when we use the term Mulatto, understand that we have our reasons. Maybe ASK us about that rather than assuming you know and comin’ for us based on your assumptions. Chances are, we’ve been waiting a very long time to be invited into the conversations about us. Even if you disagree, it’s past time to turn a monologue into a dialogue.

AND…unless you were upset when POTUS Obama—in his very first news conference after the 2008 election—referred to himself and by extension, the rest of us Mixed folks as mutts, then you are disqualified from getting riled up about our use of Mulatto. (That historic moment is why I’m writing the dang memoir in the first place. Read the first few chapters for FREE! ).

Speaking of POTUS Obama, you might have noticed that our self-identification is not always one-dimensional. We can be Mixed/Biraclal AND Black, or any other thing that suits us. Our doing so does not mean we are in denial, delusional or rejecting any part of ourselves. It doesn’t mean that we think we’re cuter/smarter/inherently better than Black people, despite propaganda to the contrary.

Just as there is zero consensus in the Black American community about whether folks prefer to be called Black or African American, we can all learn to live with the ambiguity and fluidity of Mixed-race identity and the various terms we embrace (with the exception of mutt). Maybe next time, rather than assuming, you’ll ask. Maybe rather than flinging your presumptions at us, you’ll listen when we speak. And maybe you’ll stretch your worldview to accept that one young woman calling herself Miss Mulatto is not proof of anybody’s tragedy anywhere, nor is a threat to the strength, beauty or value of Black people in the USA or anywhere on the planet.

We need you to stop identity policing, because it is distracting us from coming together to work on the far more urgent issues around those other kinds of policing. Let’s not alienate each other when solidarity could mean the difference between life and death. If I didn’t accept it from Langston Hughes, I’m damn sure not gonna let anybody else–icon or mortal–get away with it. He didn’t know any better. I’m willing to invest in the possibility that others can grow into greater awareness and help us move forward.

Because the only tragedies that matter are racism and White Supremacy. And we can never slay those dragons if we’re sweating the small stuff, assuming rather than asking, and contributing to petty divisiveness in service of the forces that refuse to recognize our humanity, no matter what we’re calling ourselves or each other.

If you liked (or hated) this, PLEASE contribute to my crowdfunding for the SWIRL GIRL memoir. It is time for ALL of us to tell our truths, share our stories, bring our voices and our visions to the world. Your support would mean absolutely everything!